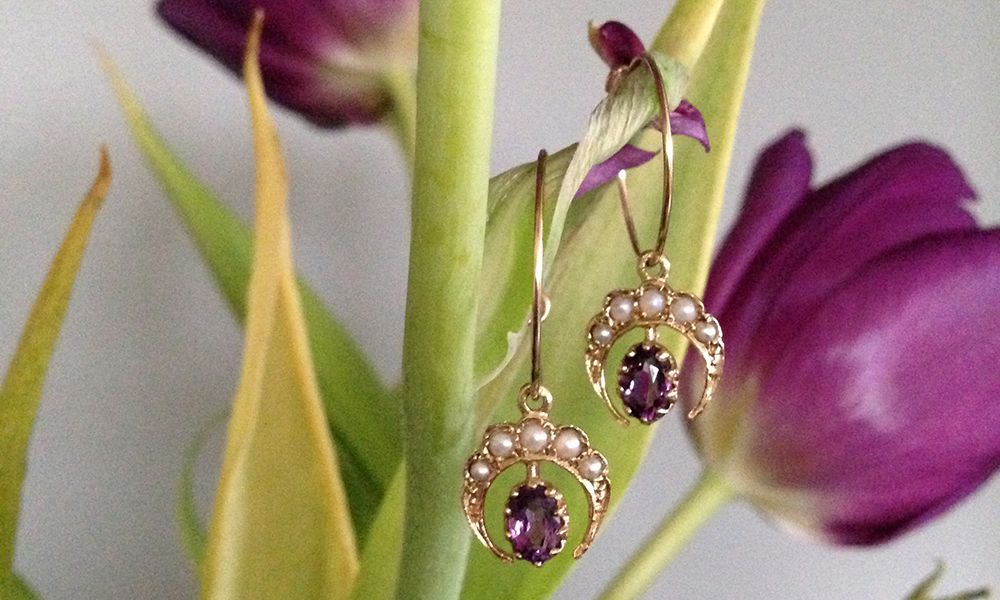 Amethyst is the most precious of the quartz minerals and the birthstone for the month of February. This particular crystal is the lucky outcome of manganese and iron in clear quartz, creating wonderful varieties of colour from light pinkish violet to deepest purple. It was originally one of the Cardinal Gems, the Old World’s top five stones, sharing glittering stardom with diamonds, emeralds, rubies and sapphires. But its position toppled with the discovery of The New World and rich amethyst mines yielding plentiful quantities in Brazil. The finest amethysts with evenly distributed colour and perfect transparency remain very special. The deep purple Siberian amethyst with its flecks of red and blue are said to command the highest prices.

It is the stone of St Valentine (him again) and faithful lovers, and the gem of springtime. The Ancients named it ‘The gem of fire” and the early Egyptians placed heart shaped amethysts on the bodies of their deceased, and in some traditions heart shaped amethysts set in silver or gold are given by grooms to their brides to ensure tranquility and long lasting marital happiness.

Tibetans include amethysts in their prayer beads to promote clarity of mind and meditation, Crusaders attached them to their rosaries mixing pagan promises with Christianity and 15th century soldiers wore them as amulets in battle to guard against injury. The Ancient Greeks and Romans claimed amethysts could guard against intoxication and dropped them into goblets of wine believing they neutralized the effects of alcohol. If only that were true!

I love an ancient Greek tale, and the one about Amethystos is a charming illustration of mythology endeavoring to provide explanations.

One day Dionysus, the well-known god of the grape harvest, fertility and fun, was filled with fury after a perceived insult from a mortal. He swore an oath to take revenge on the next mortal to cross his path and conjured up a pair of tigers to wreak bloodshed. It so happened that Amethystos, a beautiful young woman, was on her way to worship the goddess Artemis and passed by Dionysus. Her subsequent screams drew the attention of Artemis who protected her from the brutal tigers’ claws by transforming her into a pillar of translucent crystal quartz. Dionysus was filled with remorse and anointed the pillar with his goblet of wine, infusing it with purple hues.

Translated literally from the Greek word ‘a-methy-stos’ meaning ‘one that doesn’t get drunk’, the amethyst became the stone associated with sobriety, spiritual calm, and peace. It has been called ‘the soul stone’ and was set in the episcopal bishops rings to protect them from spiritual intoxication and was highly prized in the jewellery collections of Royalty! Its supposed qualities are lovely and comforting ones: healing in grief, easing addictive behaviours, protective of travellers and bringing emotional stability and strength. Intuitive, patient and peaceful. What more could anyone want?

All of these attributes, stories and associations are fascinating. But most of all a really good amethyst is such a beautiful jewel and one of my favourite gems. A skillfully faceted amethyst in a high quality setting is a perfect piece.

Carefully, neatly he folded them between

These jewels were so precious to him that the jeweller hid them carefully in his shop safe, bring out lesser prizes to show his customers.

Is purple your colour? Is amethyst a crystal that does it for you? Let me know!

We use cookies to improve your Anne Bowes Jewellery shopping experience. Find out more